Considered by many people as the best small dog for a family, since they’re great with kids. Pugs are eager to please their masters and highly social – meaning they’re friendly. Did you know that the pug is one of the oldest breed of dogs? They originally come from China, but pugs have become a popular breed around the world. These dogs were once even utilized as a military dog due to their effective tracking and were even used for guard duty.

They may not be the most agile of dogs, but the fact they’re easy to train makes the pug come in at number 15 of the top most intelligent dog breeds. Another fun Pug fact: Pugs go by a number of different names, including Chinese pug, Dutch bulldog, Dutch mastiff, Mini mastiff, Carlin, and for some strange reason, Mops.

The English Cocker Spaniel is a cheerful and excellent family dog. These medium sized dogs were bred for bird hunting, in particular an English bird called a woodcock. Considered to be sturdy, smart, and highly alert. The cocker spaniel is a very social dog and works best in groups and hate to be alone. Because of their up beat nature they have even been called the “merry cocker.” These dogs are playful and energetic so they need plenty of exercise. Today there are still people who use these dogs for hunting, but they have also become widely used as a show dog.

This pooch is referred to as an active sporting dog, and is easily trained. 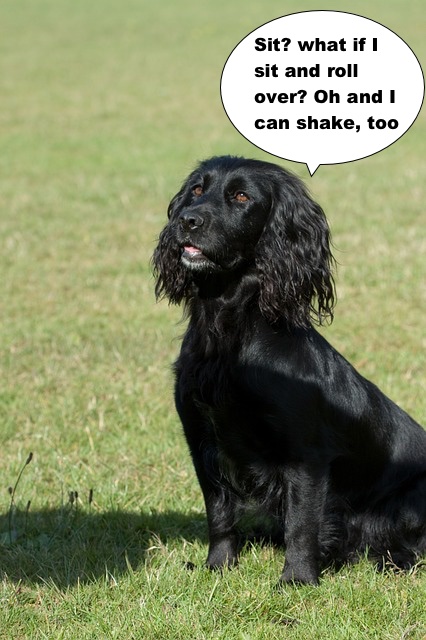 Number thirteen on our list is the alert, friendly and ever so happy Papillion pup! These pups are great problem solvers and are eager to learn, which makes them excellent service dogs and excel at competing in obedience trials. These cuties are small and full of smarts. They are unique and a great source of constant joy.

The papillon is originally from Italy and has been depicted in famous works of art throughout history. One well known piece of art is the Venus of Urbino. This dog breed has a long history of being the dog of choice for royalty and was said to be a favorite of Marie Antoinette. Much like royalty this dog breed is said to be aloof, but in the case of the dogs they’re only so with strangers. These pups are great problem solvers and eager to learn. Papillons are known to be excellent service dogs and excel at competing in obedience trials.

The Bearded Collie comes at number twelve on our list because of their boisterous personalities and their quickness. These qualities make them perfect for competing in dog sports like obedience, rally, agility. The bearded collie origins stem from the interbreeding of scottish and polish sheepdogs. While they have been around for centuries they only recently became popular as a result of a notable bearded collie getting Best in Show back in 1989. They are very energetic and like to bound. These delightful and highly intelligent dogs are still used as work dogs that are capable of working independently in addition to being a popular show dog.

The oh so fuzzy Beardie was developed as an independent worker, able to make decisions concerning the welfare and safety of its charges without depending on the shepherd, who might be miles away.

Number eleven on our list of the top 15 intelligent dog breeds goes to the sophisticated, and clever Poodle. One of the oldest dog breeds in the world, they originated in Germany where they were called a Pudelhund. Originally the functioned as a water retriever and became largely popular in France. Although they are still sometimes used as a hunting dog, they are more widely known as a pampered show dog. As a result of specialized breeding there are three different categories of poodle: standard, miniature, and toy. The Poodle is an impressive breed and has many talents, winning them many best in show ribbons.

Their intelligence make them extremely easy to train and a favorite among circuses. In the 1800s, they were often dressed in miniature human clothing and trained to act out elaborate scenes.

Number 10 on our canine Einstein list is the Rottie! Originally bred to drive cattle to the market, then used to pull carts for butchers. Rottweilers are a powerful yet gentle dog breed with a loving heart.The Rottie is easy to train, so if you give this breed the guidance and structure they need, you’ll have one of the finest doggy companions in the world.

Did you know the Rottweiler were among the earliest police dogs and to serve with honor in the military?

Even though the Boxer has one of the longest puppyhoods in the dog world, they are legendary for their patience and gentleness with children. Originally, these pups were bred to be guard dogs, and now according to AKC they are a part of the working group as well.

Boxers are also widly used in the military and police force. With the boxers strength and courage, they excel in obedience, agility, work well in search-and-rescue work and make excellent watchdogs. Typically Boxers are friendly, alert and fearless, which holds them at number nine on the top 15 most intelligent dogs list.

The Yorkshire Terrier is a big dog in a small body and wags his way into number eight on the list with their feisty personalities and their undying loyalty to his people.

The Yorkshire Terrier seems oblivious of its small size and always eager for adventure. This little dog is highly energetic, brave, loyal, and clever, with above average intelligence. These cute little pups originally came from the Clydesdale Terrier. Back in the Industrial Revolution in England these dogs were used in cole mines to catch rat in the mills.

The original intent in creating this breed was to combine intelligence, loyalty, ferocity, speed, strength and endurance to result in a dog that would quickly and easily protect their master. These pups have a mixture of many dog breeds, including the Rottweiler, Black and Tan Terrier, and German Pinscher. This highly intelligent dog is a great fit for canine sports, guard dogs, police and military work.

Well trained Dobermans make excellent pets for people with kids and multiple dogs. This breed needs to burn their energy and stay active to avoid becoming bored and destructive, so a people with more of a laid back lifestyle might want to look into another dog breed.

The Sheltie is an excellent farmer. Herding cattle and keeping away pesky birds and sheep out of the garden. These dogs excel at advanced obedience, agility, herding, and challenging games like fetching and finding hidden objects. These pups are known for their sweet and peaceful temperament and also their quick reflexes.

Shetland Sheepdogs are very easy to train because they are very attentive and responsive. The Sheltie is number six on our list because according to Dr. Stanley Coren, an animal intelligence expert, this breed is able to understand a new command after being told it fewer than five times on average, and obeying commands the first time they were given at least 95 percent of the time.

These friendly, and beautiful dogs are number nine on our list of the most intelligent dogs because they are able to out-think and control livestock and sometimes even their owners! The Aussie was originated in the western U.S. around the Gold Rush period in the late 1840s and were bred to herd livestock.

Aussies have an innate desire to please their owners so they are easily trainable! You can even train them to help with chores around the house! They can retrieve the mail for you, or pick up something off the floor and bring it to you.

They are fabulous family pets with tolerant attitudes and excel at retrieving game for hunters, tracking, sniffing out drugs, and as therapy and assistance dogs. However, they do not make great watchdogs. If someone happens to break in, they’ll go right up to them smiling and wagging their tails probably just show them where all the family jewels are. >__<

Coming in at number three on the top most intelligent, and also one of America’s overall most popular dog breeds is the loyal German Shepherd.

These dogs excel at most anything they’re trained to do: police and military service, guide and assistance work for the handicapped, herding, search and rescue, drug detection, competitive obedience and last, but not least, faithful companions. Did you know? During the World War 1 this breed served as a Red Cross dog, rescuer, messenger, sentry, and supply carrier.

Number two on our list is the hard working Labrador Retriever! Labs are loving, people-oriented dogs who live to serve their families.

Finally, the smartest dog breed is the Border Collie! They are considered the most trainable and intelligent canines in the world.

They can be a little difficult sometimes because of their high level intellect, but once you have earned their trust and obedience they make an amazing addition to the family.