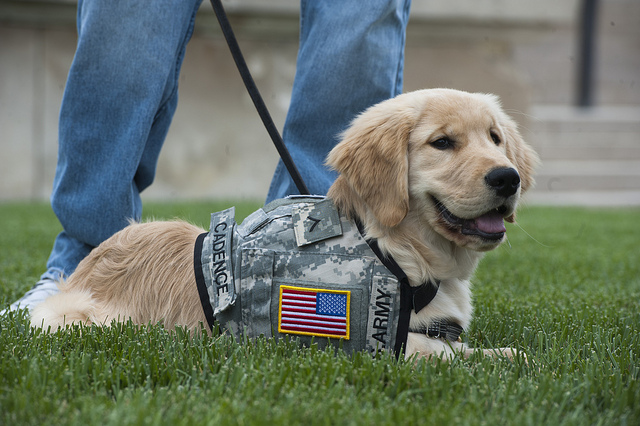 Last week we looked into how dogs can help individuals battle Post Traumatic Stress Disorder. This week we look into first hand statements from a service member who experienced those benefits.

Luis was an Army Captain in Iraq who was honored with a Combat Action Badge, a Purple Heart, and Two Bronze Stars. Several years ago he spoke to Time Magazine about the book he published entitled Until Tuesday: A Wounded Warrior and the Golden Retriever Who Saved Him. If his indirect story doesn’t convince you of the benefits dogs can bring those suffering from PTSD – there are many other accounts that sound similar.

Here is some of what Montalvan says as to why he set out to have this book published:

Until Tuesday was written because, after having been in the darkest depths of PTSD — where I wasn’t quite suicidal but often felt death would be a relief — I know how valuable information is. In those days, it was often internet-based stories and messages from other suffering veterans that helped me through. With Until Tuesday, I wanted other veterans to understand that their symptoms are real; their struggles are shared; and that there is help and hope—even if the VA is letting them down over and over again.

His Thoughts On Service Dogs

Luis does not mix words when it comes to exactly what he feels about the effects of Service Dogs and the frustration with Veteran Affairs (VA) lack of funding for them:

I wish more trained dogs were being used to help veterans, because I know they save and transform lives. With so many suicides, not to mention divorces, alcohol problems, and wrecked lives, how can we say we are doing enough of anything for our veterans?

The government is moving very slowly to embrace service dogs, but they are moving, because the healing power is obvious. There’s a study being funded right now, thanks to Senator Al Franken, to assess the efficacy of service dogs, and I think at the end of it the dogs will be incorporated somehow into the VA system.

Sadly, testing and research into Service Dogs continues as the VA despite numerous accounts like these from around the nation. However, the story Luis

Montalvan provides allows us to directly see the positive results. When so many Veterans and others suffering from PTSD continue to commit suicide at alarming rates, are we currently doing enough to help fight the problem?