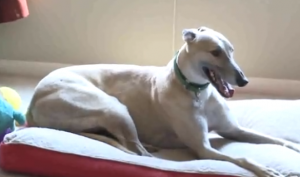 Soon after being adopted, Clobberhead rescues the family that took him in. This is the story of the mighty Clobberhead.

Dogs are often believed to be extremely kind to those that treat them well. The young Greyhound Clobberhead exemplified this in every way when his actions more than likely saved the lives of the family that had recently adopted him.

While having only been with the Cramer family for only two months in 2014, young Clobberhead knew something had been wrong in his new home. One day when his new family attempted to let him outside Clobber refused and kept returning to an upstairs room repeatedly. His actions alerted Erin Cramer to a gas leak that was occurring in the room.

Erin would also later discover that the hot water heater was giving off sparks that would have eventually led to an explosion in the Shelbyville, Indiana home. The Cramer family was most indeed fortunate to have Clobberhead the Hero around!

The Cramer family adopted Clobberhead from their local Greyhound Pets of America and quickly became quite thankful in their decision to do so. When speaking about the issue Erin states that Clobberhead drug her by the leash and upstairs to the room where the leak was coming from. She stated being hit by a “wall” of gas before even entering the laundry room.

After contacting officials Erin was told that the avoided explosion would have not only destroyed her home, but her neighbors home as well. All of this was avoided thanks to the amazing and gentle Clobber the Hero.