In this edition of Doggies That Rule Animation we take a look at a character that debuted in the 1950s and was last seen in 1988, the iconic Huckleberry Hound.

The tone death, banjo playing, relaxed blue hound has entertained viewers for decades. The Huckleberry Hound Show was also responsible for bringing Yogi Bear to TV screens. Despite only have a four season round, Huckleberry’s charm is still well known thanks to its run in syndication. If you ever hear the song, “Oh My Darling, Clementine” think of Huckleberry and his southern drawl. 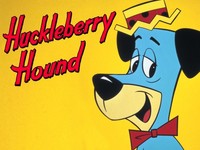 The legendary animators William Hanna and Joseph Barbera created Huckleberry Hound based off a character that Tex Avery created of similar style and presence as Huckleberry. However, Hanna and Barbera altered the character into what eventually became the lovable blue hound that we know today. Daws Butler voice Huckleberry for thirty years and was responsible for creating the personality that would eventually become an international success.

While Huckleberry Hound isn’t one of the top icons of animation, he does have a legacy of his own. So much so that The National Museum of American History often displays a 1961 lunch box that was made with characters from Huckleberry Hound and Friends on the front.

Despite not being a modern household name, the hound appeared in various Hanna-Barbera cartoons between 1958 and 1988 often being seen as one of several co-stars to the more famous Yogi Bear. After his original run as a solo star from the late 50s to the early 60s he would not again be cast as a lead until 1988 in the TV movie The Good, The Bad, and Huckleberry Hound. Which was a parody of famous western and a throwback to some western themed episodes from Huckleberry’s past.

We may not see any new content from Huckleberry again, but he was able to carve a niche for himself and was an extremely likable character.