When the DeLuca family of Tampa rescued a dog from an animal shelter two months ago, they didn’t know the pup would later save their 7-year-old daughter’s life.

Haus, a two-year-old German shepherd, took three rattle snake bites to his leg in order to prevent a venomous Eastern diamondback from striking Molly DeLuca instead.

Haus was playing with Molly in the backyard of their home when a rattlesnake approached them. The dog immediately jumped in front of the child to keep the snake at bay. Haus unfortunately suffered snake bites that poisoned his kidneys.

The dog is now recovering at the Intensive Care Unit of the Blue Pearl Emergency Veterinary and Specialty Hospital. He is receiving painkillers and antivenin.

“Without the pain medication, he’s in pain,” said Dr. John Gicking in an interview with the Associated Press. “He’s responsive, he’s alert, and his leg is swollen and uncomfortable.” 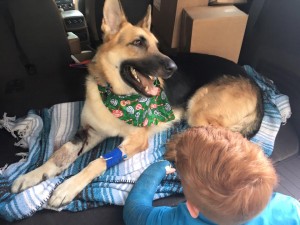 Veterinarians say they expect Haus to recover, but his treatment comes with a hefty price tag.

Luckily for the family, strangers opened their hearts and their wallets after hearing about Haus’s bravery. A family member set up a GoFundMe account to raise money for Huas’s treatment. By Friday afternoon, people had over exceeded the family’s goal of raising $15,000 by contributing more than $35,000.

The family plans to donate any unused proceeds to a local rescue organization.

Haus will spend the next few days in the ICU before returning home and seeing Molly along with her four-year-old brother.

“Right away, the kids were hugging and loving on him, he always took it, and he never did anything,” said Adam DeLuca. “Whenever anyone came to the door, he would start barking and try to be protective. He has just been an amazing dog. He’s the type of dog that when you want to go buy a dog, you pay thousands of dollars and that’s the dog you get. But we adopted him and got him for free.”