According to professor Ilyena Hirskyj-Douglas – an Animal Computer Interaction specialists at Central Lancashire University (CLU) – technology already plays a huge part in our pets’ lives. She explained the importance of the Wagg remote control in a recent Inside Hook interview, saying “dogs spend an average of two hours per day watching TV. And, as old TV sets are replaced with HD plasma displays, this number is bound to keep growing.”

It took over two years for a team of CLU researchers, led by Hirskyj-Douglas, to develop the device. Though the bright color scheme and oversized buttons make it seem like a kid’s toy, the remote is actually quite a feat of interactive design. With the exception of the ‘Paws’ (pause) button, every one of its features serves a specific purpose.

Contrary to common belief, canines are NOT color blind. They see a smaller spectrum of colors than humans do, but are more sensitive to blue and yellow hues. Yellow buttons on a blue background instantly attract a dog’s attention.

Dogs come in all shapes and sizes, so the controller was designed to be operated by any breed. The three large buttons (play, pause, change channel) are made from an anti-slip polymer to accommodate clumsy, slippery dog paws. Plus, the buttons are backlit by yellow LED’s, which help when it gets dark and encourage dogs to interact with the remote.

By human standards, the Wagg controller is giant and unwieldy. But for dogs it’s actually a portable device. Not only is it light enough for a Chihuahua to carry, the remote is also customizable. Just attach an appropriate rope toy to one of the loops and your pup will instinctively learn to carry their gadget around with them.

Each button makes a different low-frequency sound to help distinguish and remember the remote’s functions. Similarly to a dog whistle, these sounds will grab any canine’s attention. Meanwhile, humans can barely hear them at all.

In addition to being compatible with most modern cable boxes and playback devices, Wagg’s doggy remote also works with YouTube’s dog-centered channels. You can also pre-set it for Direct TV’s POOCHES and DOGTV networks. 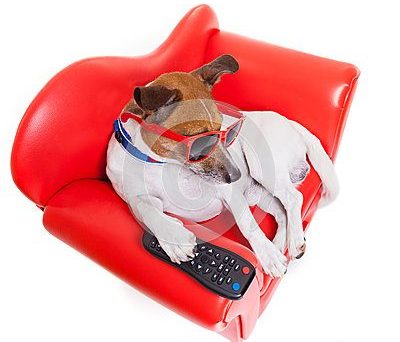 One of the main challenges of designing an electrical device for dogs is making sure they can’t get hurt using it. As such, the base of the remote is 100% waterproof, chew-proof and virtually unbreakable. Because of its large size and slick shape, the controller is also guaranteed to never become a choking hazard.

The only thing you’ll have to worry about is getting Fido to go for a walk instead of binge-watching his favorite show. And make no mistake – doggie winter is coming.