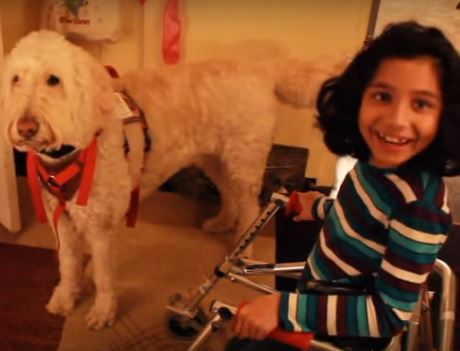 Wonder was forced to leave Ehlena at the doors of her school when she was five-years-old, because the district wouldn’t allow dogs inside the facility. So, Ehlena’s family decided to take legal action.

Now, the Supreme Court is reviewing the case to determine whether the family can sue the district for violating federal disability laws.

Road To The Supreme Court

After an ordeal with the school district, the Fry family finally managed to get Wonder through the doors for a “trial period” in 2010. However, the school placed several restrictions on the dog, according to the American Civil Liberties Union. Wonder was barred from accompanying Ehlena to the computer lab and the library.

The dog was also banned from joining Ehlena during recess and lunch time. Wonder was restricted to the back of the classroom. At the end of the school year, the school refused to recognize Wonder as a service dog and would not discuss whether the dog could return for the fall. Ehlena was transferred to another school.

The family filed the lawsuit in 2012.

That case was dismissed after a judge ruled the family first had to go through an administrative hearing. An appeals court upheld that decision 2-1. The Supreme Court justices announced Tuesday they are reviewing the case to determine if the Fry family can move forward.

The ACLU, which backs the Fry family, hopes the case will serve as a precedent for school districts across the nation.

School districts often ban service dogs from schools arguing that administrative solutions can help a child adjust without the help of dogs. The ACLU wants justices to rule that families of children whose service dogs are denied on school grounds can take their cases directly to court without enduring administrative hearings. The ACLU argues the latter could be costly, lengthy and burdensome to those involved.

“This case could remove an unauthorized hurdle for victims of discrimination across the county who seek justice for violation of rights guaranteed by the Americans with Disabilities Act,” said Michael J. Steinberg, legal director of the American Civil Liberties Union of Michigan. “It’s time for the Supreme Court to settle a dispute among the lower courts and give Ehlena Fry her day in court. To force a child to choose to between her independence and her education is not only illegal, it is heartless.”

The high court will hear the case, Fry v. Napoleon Community Schools, 15-497, when the new term begins in the fall.